Why can’t I see a vehicle/driver on the Leaderboard?
Vehicles or Drivers will only appear on the Leaderboard if they have travelled more than 125 miles over the previous 28 days – since a minimum amount of driving is required to fairly rank a vehicle or driver against the rest of the driving population.

To be consistent, we suggest that you choose either Vehicle or Driver when regularly reviewing Leaderboard performance of your fleet. 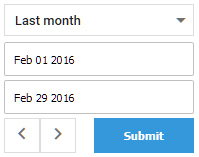