The Leaderboard in Reports / Leaderboard provides you with an inside view of your fleet based on key driving metrics and allows you to set up effective driver training and rewards programs.

Alongside your own vehicles, you can view vehicles shared with you by another organization using EROAD Share. Viewing the Leaderboard by Driver helps you accurately monitor individual driver behavior of drivers using the Electronic Logbook on the EROAD Driver app. It's all about accountability!

We've listened to a large number of customers using Leaderboard to help train and maintain high safety standards in their fleets, and from February we've rolled out a few tweaks to the system.

Fleet managers might notice some changes to the rankings in Leaderboard, but these adjustments should help reveal coaching opportunities for new drivers, community awareness and bring attention to rural vs. metro driving conditions.

From the Leaderboard, you can drill down to individual Driver Insight reports. 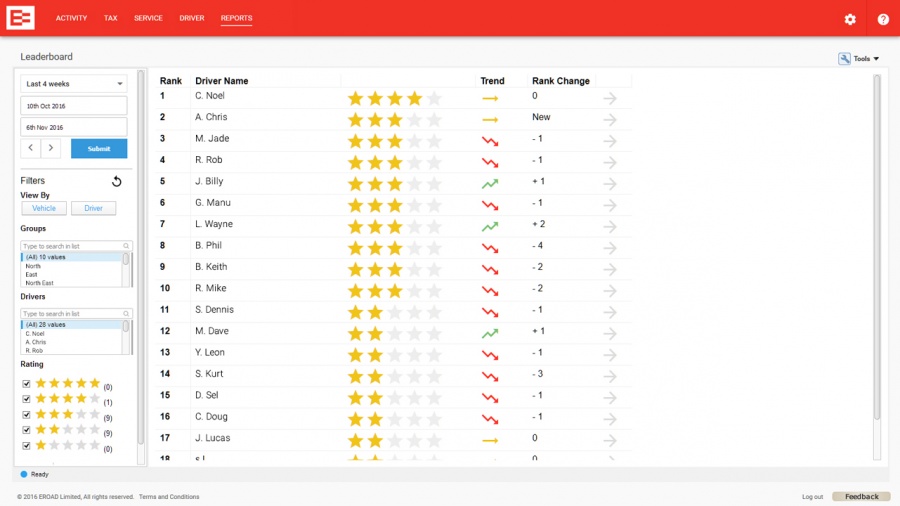 In the last 4 weeks Beth and Bill have both had a great run, with no Over Speed, Harsh Braking or Sharp Acceleration events. Beth has driven 3500 miles, and Bill has driven 2080 miles. Beth will be ranked higher since she has driven more distance without any events.

Shaun is disappointed that most of his drivers are still only 4 star, even though their over speed events per 100 miles are not that high. He wonders – how can I move my drivers up the rankings to achieve 5 star ratings?

Dave is trying to understand why most of his drivers are still only 3 star, even though they have low numbers of Over Speed Events. However, when he drills down to the Driver Insight or checks the Over Speed Dashboard, he can see that the Over Speed Events are at a high speed, and one of his light vehicles has been speeding at 75mph.

“Over Speed Events have a huge impact on the score but Harsh Braking and Sharp Acceleration events count, too. Turns out that Ryan has had a heavy foot on the brakes with 10 harsh braking events to his name, which is why his rating is lower than Rod’s.”

Use the Tools menu, located at the upper right of the MyEROAD page to select an option to download, email or schedule to receive this report on a regular basis. Use Export to download the report to your computer.

Speeding—traveling too fast for conditions or in excess of the posted speed limits—is a factor in almost one-third of all fatal crashes. In 2014, there were 32,675 fatalities on our Nation's roadways, of which 9,262 were speeding-related.

Vehicle speeds are a crucial factor in traffic safety. NHTSA estimates that speeding is involved in approxi­mately 31% of fatal motor vehicle crashes, costing soci­ety over $40 billion per year.