The Leaderboard in Reports / Leaderboard provides you with an inside view of your fleet based on key driving metrics and allows you to set up effective driver training and rewards programmes.

Alongside your own vehicles, you can view vehicles shared with you by another organisation using EROAD Share. Viewing the Leaderboard by Driver helps you accurately monitor individual driver behaviour using Driver ID units, Driver Login on Ehubo2 or the Electronic Logbook on the EROAD Driver app. It's all about accountability!

From the Leaderboard you can drill down to individual Driver Insight reports. 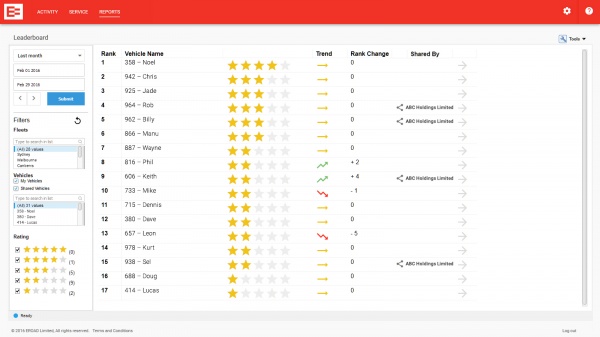 In the last 4 weeks Beth and Bill have both had a great run, with no Over Speed, Harsh Braking or Sharp Acceleration events. Beth has driven 3500km, and Bill has driven 2080km. Beth will be ranked higher since she has driven more distance without any events.

Shaun is disappointed that most of his drivers are still only 4 star, even though their over speed events per 100km are not that high. He wonders – how can I move my drivers up the rankings to achieve 5 star ratings?

Dave is trying to understand why most of his drivers are still only 3 star, even though they have low numbers of Over Speed Events. However, when he drills down to the Driver Insight or checks the Over Speed Dashboard, he can see that the Over Speed Events are at a high speed, and one of his light vehicles has been speeding at 117km/h.

“Over Speed Events have a huge impact on the score but Harsh Braking and Acceleration events count, too. Turns out that Ryan has had a heavy foot on the brakes with 10 harsh braking events to his name, which is why his rating is lower than Rod’s.”

Use the Tools menu, located at the upper right of the Depot page to select an option to download, email or schedule to receive this report on a regular basis. Use Export to download the report to your computer.

Speeding remains the greatest cause of death and injuries on our roads, contributing to about 40 per cent of road fatalities. Statistics from speed-related crashes from 2008 to 2012 showed: